Quinoa (KEEN-wah) is commonly known as a “super food.” But what is Quinoa? Quinoa appears similar to many cereals- it is eaten like a cereal; it has a similar nutritional makeup to cereal. These characteristics make quinoa a “pseudocereal.” It’s actually a seed! 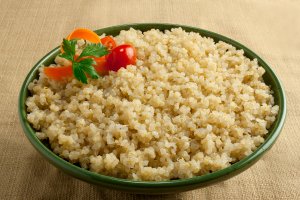 Quinoa has been an important crop for centuries. It originated in the Andean region of Ecuador, Bolivia, Columbia and Peru. In fact, it was a sacred crop of the Incas in South America. Two thousand thirteen has even been declared the “Year of Quinoa!”

Quinoa is considered a super food partially due to its health benefits. It contains more than nine essential amino acids, calcium, phosphorus and iron. At the same time, it is gluten free and cholesterol free. It’s also a very drought resistant crop that can grow in poor soil, making it easy to cultivate.

As easy as it is to grow, it’s just as easy to cook. It cooks like rice- it can either be boiled on the stove or cooked in a rice cooker. It’s easy to tell when quinoa is done cooking because the white germ will stick out!

Its texture is light and fluffy when cooked, similar to white rice and couscous. But the flavor differs. The flavor quinoa is mild and nutty, making it perfect for vegetable pilafs. Its flavor also lends itself well to bitter greens, such as kale. The seed benefits from a quick fluffing right before serving.